The Spyderco Paramilitary 2 and Benchmade 940 Osborne are two incredibly famous pocket knives. Real classics in the knife world. Many who prefer large pocket knives consider either of these knives to be the perfect EDC knife. But what are the differences? Are there things they have in common? We will tell you!

Of both knives many limited editions were produced throughout the years. For this versus we compare the standard models: the Spyderco Paramilitary 2 C81GP2 and the Benchmade 940 Osborne.

The similarities between the Spyderco Paramilitary 2 and Benchmade 940 Osborne

Both knives are produced in the United States, can be opened with one hand and have a blade length of approx. 8.6 cm. Because of this blade length the Paramilitary 2 and the 940 Osborne are a part of the larger EDC knives category.

Both knives are enhanced with a pocket clip. No deep-carry pocket clips you often see on many other knives. As such you carry the knife a lot higher in your pocket. You can, however, mount the clip of the Paramilitary 2 in four places on the handle. For the 940 you have two options.

Another similarity is that a smaller version exists of both knives. The Spyderco para 3 C223GP and the Benchmade 945 Mini Osborne.

The differences between the Spyderco Paramilitary 2 and Benchmade 940 Osborne

It depends on your preference which of the two you choose. They basically work the same. A thumb hole, however, is easier to open while wearing gloves. However, after some practice you could also make that work with the thumb stud.

The grind is also different. The Paramilitary 2 has a high, completely flat grind and a leaf-style blade shape. The 940 Osborne is enhanced with a low, partially flat grind and a reverse tanto-style blade shape. This high flat grind ensures that the Paramilitary 2 is a better slicer. Great when cutting fruit or cardboard. The blade is namely incredibly thin behind the edge and gradually becomes thicker. Like a kitchen knife. This does mean, however, that the tip is a little more fragile. Because of the grind and the reverse tanto-style tip the blade of the Osborne is a little more robust.

The blade of the Paramilitary 2 is 4 mm thick. This means that the blade is 1.1 mm thicker than that of the Osborne.

Halfway through 2021 Spyderco changed the type of steel of the Paramilitary 2 from CPM S30V, the steel used for the 940 Osborne, to CPM S45VN. These types of steel are not that different. CPM S45VN is a little stronger and more corrosion resistant than CPM S30V.

The 940 Osborne uses an axis lock. This is a lock that falls in place with the help of two springs and blocks the blade. The Paramilitary 2 uses Spyderco's compression lock. This is a type of reversed liner lock. These locking mechanisms are located in the spine of the handle. To make sure your finger won't get near the blade when you close the knife.

The main difference between these locking mechanisms is that the Osborne, due to the design of the axis lock, is suited for both left and right-handed use. You namely use your thumb and index finger. For the Paramilitary 2 you use your index finger. That is why there is a left-handed version for when you are a left-handed user. With a little practice, however, you can also get used to the normal Paramilitary 2.

The Paramilitary 2 uses standoffs to keep the scales together. In between these standoffs there is some room: an open construction. For the 940 Osborne this is not the case. There is a closed construction with a purple anodized aluminium backspacer.

An advantage of G10 is that it won't scratch easily and won't get very cold in winter. Aluminium, however, does cool off quickly and scratches easily. These scratches do add some charm to the knife. Like a patina on copper or brass.

This brings us to the weight. Because of the higher blade and the use of large steel liners in the handle, the Paramilitary 2 is clearly heavier. The Paramilitary 2 namely weighs 111 grams and the Osborne only 83 grams. So a little lighter!

Something you often overlook is the presence of a lanyard hole. It is missing on the 940 which means you cannot pimp the knife with a piece of paracord. The Paramilitary does come with a lanyard eye. A very large one even which makes attaching a lanyard a piece of cake.

Which knife will you choose?

Both knives are about the same length. So in the end it comes down to design and what you want to do with the knife. Do you prefer a slim pocket knife? If so, the Benchmade 940 Osborne will be the best choice. Do you think an ergonomic handle is key and do you prefer a thumb hole? Are you planning to use the knife for food prep? Go for the Spyderco Paramilitary 2. The colour could also be something to take into account. The green handle with purple backspacer of the 940 Osborne looks very cool! 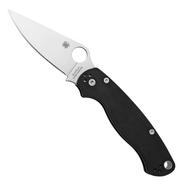 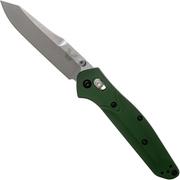 6 reasons to keep a knife handy

Top 5 multi-tools for daily use

Leatherman Buying Guide: which Leatherman will suit me best?