Order before 2:30 PM and get same day shipping Free shipping over €100 We ship from the Netherlands
Login
Service
Get Smarter
Gift Cards

The start of the story of W.R.  Case & Sons takes us back to the year 1889. That was when the four Case brothers started producing and selling knives alongside a busy wagon trail in the state of New York. What made their knives so unique was the excellent heat treatment of the steel.  he result was namely that the Case knives retained their sharpness longer than the knives produced by competitors.

Ever since those early days Case continued to grow as a company. You came across these knives in the pockets of farmers and on the desks of presidents. During many historic events Case knives were used on a daily basis. From world wars to Apollo missions to the moon. So yes, it is safe to say that Case is not only known worldwide, but even beyond!

Case knives are often handed down from grandfather to father to son. For many it is their first introduction with a pocket knife. A real tool that will help you rule the world, not a simple gimmick.

Anyone who takes a closer look at the Case Knives logo quickly discovers the XX marks. It is the result of the new hardening methods Case developed in the early days of the company. After this process the blades need to be tempered. Case repeats this process twice and for every cyclus they used to add an X to the blade. All to make sure everyone knew the blade had completed this step. It didn't take long before people started to notice that the knives with the two characterizing X's were superior to other knives. The result was that the XX-mark became a quality feature. A mark that is still a part of millions of Case knives that are carried worldwide.

The term ‘trapper’ comes from the hunter who uses traps to catch game.  No longer that relevant in Europe, but in the United States this is still done in some states. Partly for fur and meat, partly for wildlife control. During these tasks you need a good pocket knife: the Trapper.

The model was probably brought to the United States by emigrated knife makers from Sheffield, England and Solingen, Germany, who took their own patterns to the United States. Case was one of the first who produced this model at the start of the twentieth century.  Ever since the Second World War, however, it became truly popular and a model you saw literally everywhere in the United States.

The Trapper pocket knife is enhanced with two blades: a clippoint and a speypoint.  The pointed tip of the clippoint is great when making incisions and for other detailed tasks.  Originally the speypoint was developed for farmers and cowboys who used this knife to castrate bulls. Today people mostly use the speypoint to gut game, or more likely: to cut and peel vegetables and fruit.

The two Trapper blades are always located next to each other, shoulder to shoulder. Both on the same side of the handle. As such the handle is slightly more ergonomically shaped than, for instance, a Stockman. It is typical for a Trapper pocket knife that the end of the handle, the part where your ring finger and little finger meet, is a little thicker. As such you have a little more grip.

Why is the Trapper so popular?

Of all traditional pocket knives the Trapper has always been one of the most popular ones. Of course it feels amazing in hand, but mostly the different variations are why this knife is so popular. There are, for instance, Trappers in different sizes, but also Trappers with one blade. And we haven't even discussed the different handle materials yet.

The story of Case and its numerous handles

Characterizing for the Case knives are the handles. They are made from dozens of different materials. From types of wood to special synthetic materials. Especially the handles from Jigged Bone are very recognizable.  This is cow bone enhanced with a special colour and texture. By varying the colours and textures you end up with an almost infinite amount of combinations.

It is also why the Case knives are so collectible.  With just the countless Case Trappers alone you can already fill quite the showcase.

Case collectors are serious about their hobby. There is a Collector's Club that hosts various gatherings. Books have been written about the knives and the company behind them. The introduction of the annual 'tang stamps' in 1970 was a genius idea. Every ten years Case introduces a new stamp for the blade. That stamp will place ten dots around the Case logo for that decade. In the first year there will be ten dots. The next year one dot is removed from the stamp. So, 9 dots. The year after that another dot is removed, until the decade is over and it is time to introduce a new stamp. The result is that it is incredibly easy to learn in which year the knife is produced. This also means that there are collectors who annually purchase the same Case Trapper, with the same handle material, but with the newest version of the 'tang stamp'. This is proof that Case truly caters to its hardcore collectors.

In a world where many things are produced by machines, we often tend to forget that some things are still made by hand.  And even though certain individual parts on the Case knives are cut from large rolls, the assembly of nearly all Case Knives is applied by skilled hands.  Coarse parts are turned into beautifully finished pocket knives by expert artisans with the help of sanding and polishing machines.

In the videos it looks incredibly easy: they move a knife alongside a grinding belt and a polishing machine and bob's your uncle. But looks can be deceiving: this takes years of practice. Not something you will be able to do after a couple weeks of practice. That is why Case is, justifiably so, proud of its employees. After all, without those experts there wouldn't even be Case Trapper knives to collect! 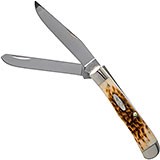 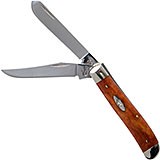 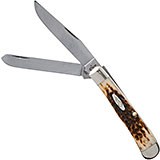 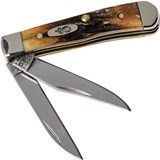 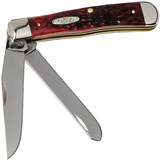 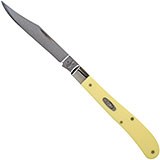 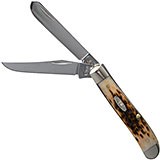 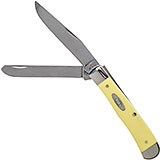 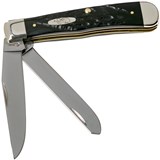